Part in the Chronicle

Mia Corvere is the main protagonist of The Nevernight Chronicle. She was born in Godsgrave to a wealthy marrowborn familia that enjoyed much power and influence until her father tried, and failed, to overthrow the Itreyan Senate and reinstitute the monarchy. His actions caused the complete destruction of the Corvere familia. In pursuit of vengeance against the men responsible, Mia sought out the Red Church in the hopes of becoming an assassin skilled enough to enact her revenge.

Though she failed the Church's trials, she was inducted as a Blade all the same after rescuing the Church's Ministry during an assault by Luminatii legionaries by the Lord of Blades, Cassius, shortly before he succumbed to his wounds.

Mia is of mixed Itreyan-Liisian blood. She is also Darkin - one who controls the darkness itself. She has little understanding of her powers, and out of the two other Darkin she has met, one died before divulging any hidden knowledge he might have withheld on the subject, and the other knew even less than her. In Darkdawn, she discovers the truth about being Darkin.

Prior to her Weaving in the Quiet Mountain, according to the narrator, Mia was not a "pretty thing". Her skin was pale, her cheeks hollow, lending her a hungry, wasted look. She had crow-black hair that reached her ribs and self-inflicted crooked fringe. Her bow-shaped lips and flesh beneath her eyes seemed perpetually bruised, and her nose had been broken at least once.

She was short and stick-thin, barely enough flesh to fill her clothes. She was, as the narrator puts it, "not a beauty lovers would die for."

Mia is fearless (literally) because of her shadow daemons, Mister Kindly and Eclipse, who drink her fears. This has proved to be both an asset and a hindrance to Mia - her fearlessness can sometimes lead to recklessness and brashness. At the beginning, she was dangerously dependent on her shadow passengers, often crippled and consumed by her fear in their absence and unable to process it on her own. Over the course of the novels, this becomes less true. As Mia faces her inner demons and begins to build self-confidence, she finds it far easier to overpower her fear without her daemon companions. In Godsgrave, she does not balk at all at the notion of sending them away, on errands or whatnot.

While she is outwardly vicious and cold to even those closest to her, she has proven to be, one of the most sympathetic and kind characters in the Nevernight pantheon. During her training at the Red Church, she is told multiple times that she does not belong and that she is better than the rest of them. She goes on to prove this, when she sacrifices her future in the Red Church to spare an innocent life. She demonstrates her innate goodness further after being rejected and shunned by the Red Church for her failure as she rushes to their aid in their most desperate hour, saving the Ministry from the devious machinations of the Järnheims.

And in the same vein, although she outwardly seems to be utterly consumed by her desire for vengeance, she has not lost herself in it. Her pursuit of vengeance may drive and motivate her, but it has not defined, consumed, or corrupted her. She proves this in Godsgrave, when she risks herself and jeopardizes her carefully constructed schemes to save the lives of not only her fellow gladiatii, but their domina, Leona, whom Mia warns of her own treachery - again, jeopardizing herself and all she had worked for - so that Leona might survive Mia's vengeance and evade punishment for her champion's actions.

Mia has proven time and time again that while she desires little more than vengeance for her familia, there are lines she is unwilling to cross. She will not take an innocent life, and will not abandon or betray her companions in their times of need.

Mia is exceedingly clever, as well as well-versed in court and political intrigue, thanks to her mother's teachings. While she prefers clean and honest killing, she is capable of great deception and manipulation.

She does not shy away from self-sacrifice of any kind, perfectly willing to do whatever is necessary to achieve her goals. She considers her body to be a tool, sex a weapon - one she has grown to wield shamelessly and with ease.

Mia is Darkin, one with the ability to control and shape shadows. She keeps two shadow daemons,[Mister Kindly and Eclipse, the former since childhood, and the latter since the death of Lord Cassius. Her primary darkin abilities are as follows.

Mia can fight well with a variety of weapons, like all acolytes from the Red Church, but she prefers blades, particularly, her gravebone stiletto. This is a familia heirloom that once belonged to her mother. However, she is also talented with gladii, as she demonstrates both in her Church trials in Nevernight and during her time as gladiatii in Godsgrave. She prefers the Carravaggio style, named after a famous Itreyan duelist who preferred twin blades. She trained under a master of the art during her time in the Quiet Mountain, the Hand of Our Lady of Blessed Murder Naev, and, while her skill with a blade left much to be desired upon her initiation into the Church of Our Lady of Blessed Murder, by the end of her trials, she became a true master.

Initially, she relied on her darkin abilities heavily during combat to best her opponents. But without her powers to fall back on, as we see in her training in the Hall of Songs during Nevernight and in the Remus Collegium during Godsgrave, she strikes as a far less formidable opponent. However, Mia has come a long way in terms of independence from her darkin gifts. In Nevernight, she was forced to train under Solis’s watchful eye and abstain from her powers. In Godsgrave, it was much the same, with Furian. As a result, she was forced to fight as the giftless do - without shadowy tricks and dark ruses. Because of this, even without darkin abilities , she has become a force to be reckoned with.

Skill in combat aside, Mia is also a highly talent venom-crafter. As a child, she deeply enjoyed the book Arkemical Truths, written entirely about natural and chemical poisons. Even prior to her initiation at the Red Church, her knowledge of venom and toxins was extensive, so much so that she greatly impressed the Shahiid of Truths, Spiderkiller, during her first lesson in the Hall of Truths. She went on to place Top of the Hall, and earn the favor and endorsement of Spiderkiller herself. Although Spiderkiller later retracted her favour upon Mia's failing of the final trial, Mia was still leagues ahead of any of her fellow acolytes when it came to venom-craft, her superiority uncontested.

Her extensive knowledge went on to serve her well during her time as gladiatii, allowing her to manipulate the collegium with ease and gain the favor of Dona Leona. It also saved her life, and the lives of the majority of her fellow Falcons, when the collegium was poisoned by the devious Magistrae. Mia was able to recognize the toxin and rapidly synthesize an antidote before the death toll rose too high.

Due to the training she received from her Shahiid Mercurio, Mia is extremely resourceful. The old man was highly fond of trials and tests. Although the varied in difficulty and danger to life and limb, they almost always began with Mia awakening with a mild slumberweed headache in unfamiliar surroundings. Once, after a lesson in the principles of magnetism, she'd awoken in the pitch-black of Godsgrave's sewers with nothing but an iron hairpin and piece of chalk to help her find her way out. After six months of lessons in the tongue of Old Ashkah, she'd awoken five miles into the Godsgrave necropolis with half a skin of water and directions to the exit written in Ashkahi script.

Although Mercurio dubbed these trials "treasure hunts", it seems the only "treasure" to be found at the end of these exercises was "continued existence". Still, they did make for singularly dedicated student.

Mister Kindly and Eclipse are Mia's passengers. Mister Kindly has been with Mia since her father's death, originally taking the shadow form of him, but then taking the form of a cat, reasoning it would be easier for Mia to deal with, after the death of her beloved childhood cat. Mister Kindly is very sarcastic and cruel, disputing many of Mia's ideas and pointing out all and all things that could go wrong. Mia can often become very annoyed with him but does enjoy his company. She used to tell him everything but started to create a void in their relationship when she started sleeping with Ashlinn.

Eclipse was formally Cassius' passenger, but after his death, joined Mister Kindly as Mia's. She takes the form of a wolf, as it was the form she reasoned Cassius would prefer. She is said to be kind, reasonable and agrees with Mia's ideas and thoughts, rather than disputing them.

During Godsgrave, Mia and Ashlinn ponder the idea that a Darkins passenger takes on the personality of the person they first imprint on, explaining why Mister Kindly and Eclipse are so different.

During the first novel in the series, Mia is very uncomfortable sending away Mister Kindly, but during Godsgrave, she can easily send both Mister Kindly and Eclipse away on menial tasks, learning to survive with her fear. 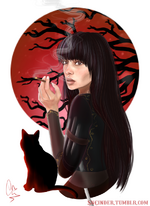 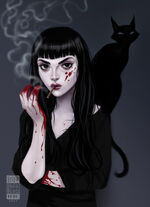 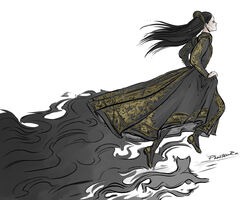 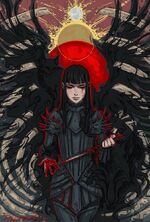 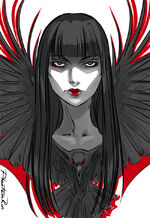 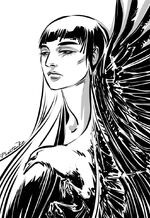 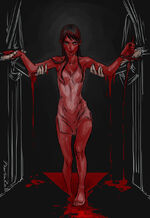 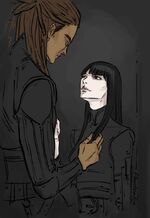 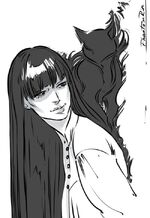 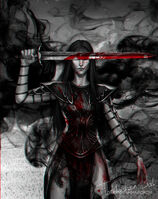 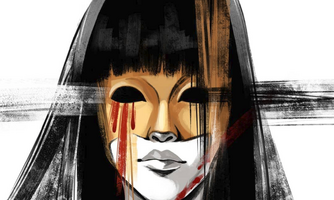 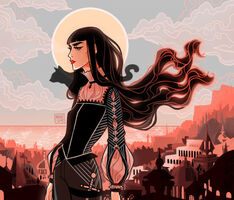 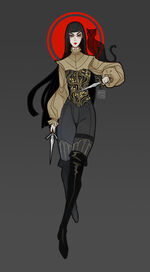 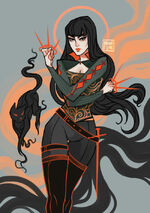 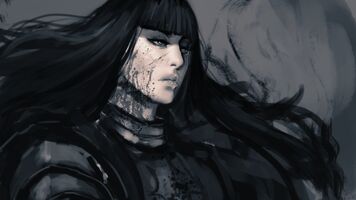 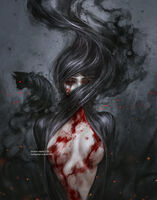 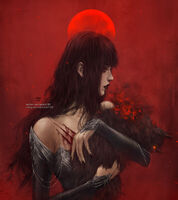 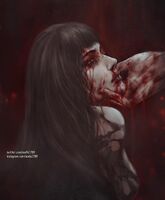 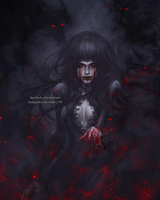 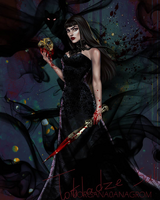 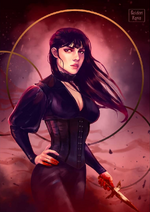 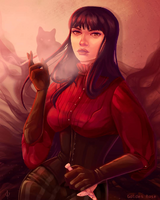 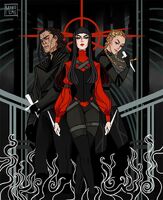 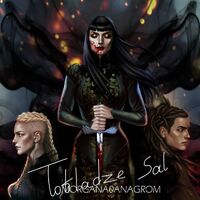 by Morgana0anagrom
Retrieved from "https://nevernight.fandom.com/wiki/Mia_Corvere?oldid=2002"
Community content is available under CC-BY-SA unless otherwise noted.